Written by jen.demeterio@imanila.ph on July 4, 2018. Posted in Latest News. 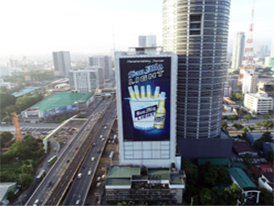 We are excited to announce that we have completed the construction of one of the biggest billboards in the Philippines located at EDSA corner Quezon Avenue, Quezon City.The first brand to be advertised is – SAN MIG LIGHT.

TheSAN MIG LIGHT BILLBOARD AT NAPOLCOM BUILDING towers over the EDSA Skyline. The gigantic billboard has a total area of approximately 18,800 sq. ft. It is massive at 188 – feet high and 100 – feet wide. With its size and stunning graphics, the SAN MIG LIGHT BILLBOARD will surely build excitement and capture the attention of its target markets.

NO METAL HALIDES WERE USED TO LIGHT THE BILLBOARD

Yes, you got that right. No metal halides were used to light this billboard because of its huge size. Instead, Luneta Advertising used 24 units of LED Projection Lights. The combined 1,000 and 1,200 LED watts were projected from a site beside the NAPOLCOM Building. The LED lights are sourced from Europe, and are more lightweight and cost efficient than the traditional metal halides.

Historically conceived for then Ayala Museum’s Rizal VR advertisement, the lenticular billboard became a sought-after feature for different companies like Food Panda. Today, the site houses Toyota Philippines’ Innova and Vios ads, both of which are hero car products of the renowned Japanese manufacturer.

As they say, new year means new opportunities—and that was exactly what transpired at the beginning of 2020 with Luneta Advertising and McDonald’s Philippines  entering a milestone partnership

Boasting a 188’ (H) x 100’ (W) specs, Luneta Advertising’s premiere site set its eyes on the next brand ready to take on the next BIG step! Erected at the NAPOLCOM building in EDSA (cor. Quezon Avenue), LAI’s Mega Wall Billboard prides itself not only for its location and size but for its innovative lighting system that generously provides illumination fitting a literal gargantuan advertisement.

The continuous growth of OOH alongside Digital is another expansion large businesses are taking advantage of.